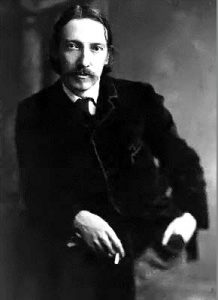 A selected passage from Aes Triplex by Robert Louis Stevenson

To be overwise is to ossify; and the scruple-monger ends by standing stockstill. Now the man who has his heart on his sleeve, and a good whirling weathercock of a brain, who reckons his life as a thing to be dashingly used and cheerfully hazarded, makes a very different acquaintance of the world, keeps all his pulses going true and fast, and gathers impetus as he runs, until, if he be running towards anything better than wildfire, he may shoot up and become a constellation in the end. Lord look after his health, Lord have a care of his soul, says he; and he has at the key of the position, and swashes through incongruity and peril towards his aim. Death is on all sides of him with pointed batteries, as he is on all sides of all of us; unfortunate surprises gird him round; mim-mouthed friends and relations hold up their hands in quite a little elegiacal synod about his path: and what cares he for all this? Being a true lover of living, a fellow with something pushing and spontaneous in his inside, he must, like any other soldier, in any other stirring, deadly warfare, push on at his best pace until he touch the goal. ‘A peerage or Westminster Abbey!’ cried Nelson in his bright, boyish, heroic manner. These are great incentives; not for any of these, but for the plain satisfaction of living, of being about their business in some sort or other, do the brave, serviceable men of every nation tread down the nettle danger, and pass flyingly over all the stumbling-blocks of prudence. Think of the heroism of Johnson, think of that superb indifference to mortal limitation that set him upon his dictionary, and carried him through triumphantly until the end! Who, if he were wisely considerate of things at large, would ever embark upon any work much more considerable than a halfpenny post card? Who would project a serial novel, after Thackeray and Dickens had each fallen in mid-course? Who would find heart enough to begin to live, if he dallied with the consideration of death?